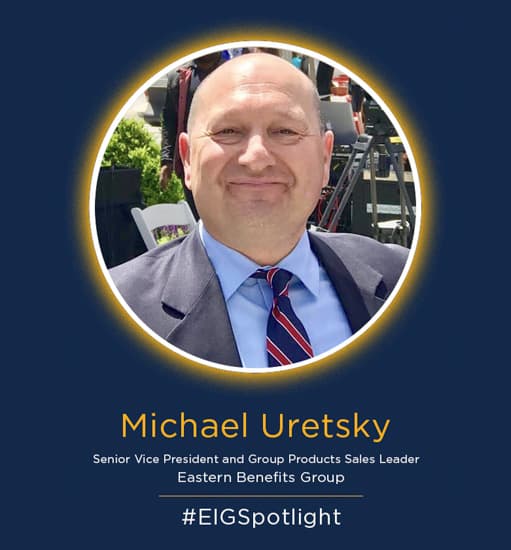 We’re excited to feature Michael Uretsky for this month’s #EIGSpotlight!

Michael is our Senior Vice President and Group Product Sales Leader at Eastern Benefits Group in our Wakefield office. He has been with the Eastern Benefits division since 2004. Michael has proven over the years that he is a knowledgeable, friendly, and generous resource for his colleagues and the community. For that reason and many others, he was inducted into the prestigious President’s Club this year and also received the Core Value Award for Diversity & Inclusion Advocacy for his work as a co-chair of our Veterans and Families Employee Network.

At Eastern Benefits Group, Michael and his team are responsible for creating, designing, and implementing employee benefit plans for companies headquartered in New England. Michael is involved in all aspects of EBG’s sales and marketing of group products and actively contributes to the leadership and direction of the division as a Senior Manager. He enjoys building and coaching his teammates at the organization and shares his knowledge with all of our employees so everyone can succeed in their careers.

In addition to these responsibilities, Michael is actively involved in our Veterans Employee and Family Network. Michael has been instrumental in representing and advocating for the veterans community in Massachusetts on behalf of Eastern Bank, Eastern Insurance Group, and Eastern Benefits Group. The network was started in 2013 and has since helped many servicemen and servicewomen transition into civilian life. Through Michael’s and the network’s efforts, Eastern Bank Charitable Foundation was able to grant $50,000 to UMass Lowell’s Office of Veterans Services for The Veterans Fund in order to provide zero-percent loans to student-veterans facing financial crises.

Michael and the Veterans Employee and Family Network also advocate for veterans at the state level with their veteran legal services partners, especially to help with access to healthcare benefits. Alongside his SVP co-chair, Stephen DiPrete, and the many employee volunteers, they have been able to make a huge difference in the lives of local veterans since 2013.

Michael is very appreciative of his team’s support, which allows him to invest time in helping veterans and building awareness of Eastern’s efforts in the veteran community.

On behalf of the entire team at Eastern team, we would like to thank Michael for all that he has done for our organization and community and congratulate him on his recent induction into the President’s Club.

Would you or another Eastern Insurance Employee be perfect for our next #EIGSpotlight? Email Katharine Jop at kjop@easterninsurance.com and let us know.