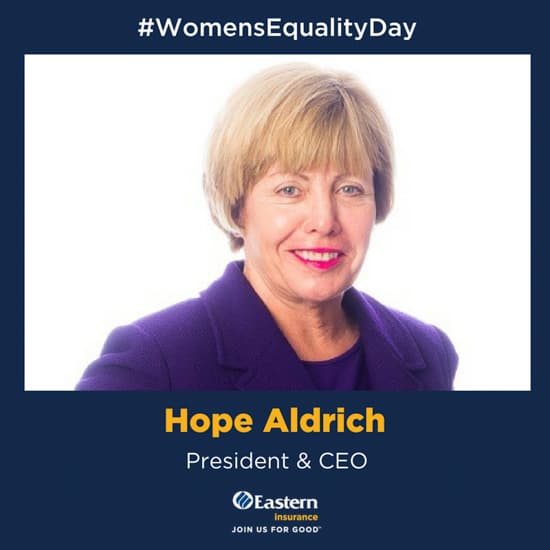 We are proud to spotlight our President and Chief Executive Officer, Hope Aldrich, today on #WomensEqualityDay!

Women’s Equality Day commemorates the passage of the 19th Amendment to the U.S. Constitution, granting women the right to vote.  This monumental victory has led to the advancement of equal rights for women not only in politics, but also in business, education, and society.

At Eastern Insurance Group, we’re proud of the diversity of our organization and our strong and inspiring female leader. Hope Aldrich has been President & CEO of Eastern Insurance, one of the largest full-service insurance agencies in New England, since 1997, growing the agency from $6,000,000 in revenue to a projected $80,000,000 this year.

Hope truly embodies the spirit of equality, the Join Us For Good campaign, and the guiding values of Eastern Insurance. Hope fosters an inclusive workplace culture that celebrates and advances the career developments of our female executives and employees.

Hope has received many distinguished honors in her career including Banker & Tradesman’s inaugural “Women of FIRE” in 2011,  The Insurance Professional of The Year in 2012 and in 2016, Hope received the Sandra J. Pattie Distinguished Leadership Award from New England Women in Banking for her commitment to helping others, especially women, succeed personally and professionally. In addition, Hope is an active member of many local communities in Massachusetts. She is a board member of the Greater Boston YMCA, the Board of Corporators at Eastern Bank and the Board of Overseers of Newton-Wellesley Hospital.

Many thanks to Hope for her commitment and dedication to Eastern Insurance Group and the communities we serve, and for being an inspiration to us all!