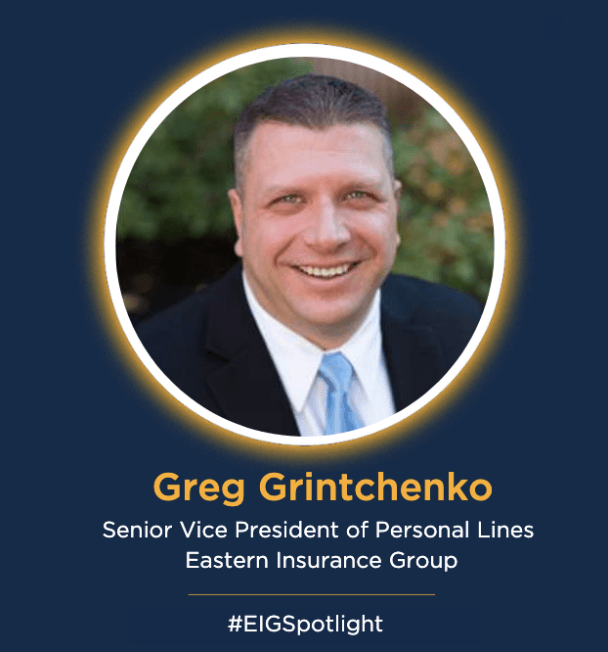 Here at Eastern Insurance, our employees are what help set us apart from other agencies. We value their tremendous efforts to help support the success of our company as well as their commitment to giving back to local communities. One of our employees who inspires us inside and outside of the office is our latest #EIGSpotlight — Greg Grintchenko, who just celebrated five years with Eastern Insurance.

Greg’s experience in the industry precedes his time at Eastern Insurance, though to many at the agency it seems as if he has always been with us! He was previously with a direct writer where he gained much of his sales and management experience. After that company went public and began to lose its personal connection with their employees, Greg felt the urge to join another insurance organization. He soon found his new home with Eastern Insurance, a wholly-owned subsidiary of the mutually-held Eastern Bank. His colleagues recognized his skills right away, as his colleague, Carole Mahoney, Assistant Vice President and Inside Sales Manager, said, “Greg’s style of transparency in management, fine-tuned over many years of experience, encourages growth and self-sufficiency. He continually provides me with opportunities to learn and to become a strong leader for my team.”

Now, as Senior Vice President of Personal Lines at Eastern Insurance, Greg works hard to lead his team by example while encouraging them to hit their personal goals, though he notes his team is so hard-working, they don’t need much motivation from him. “The people are what make Eastern Insurance a great place to work, and a great place for our customers to trust their insurance needs!” said Greg. Together with his team, Greg works to provide an excellent sales and service experience for the clients of Eastern Insurance, and it seems to be working based on the collective success of his department.

In addition to the great people he works with, Greg also loves Eastern Insurance’s commitment to giving back to the community, and truly represents the agency’s Join Us For Good movement. Last year he was Eastern Insurance’s top volunteer, accruing 650 total hours of volunteer time! Greg is heavily involved with youth sports in his community, coaching football, soccer, basketball, softball, and the current Vice President of the Milford Youth Football and Cheer Board of Directors. He sees coaching as a great way to bond with his own kids while being a positive role model to their peers as well. Greg shows no signs of stopping either; he says that he plans to continue to coach as long as he feels that he is adding value to the teams, and his kids are still playing.

In addition to his coaching, Greg has also been training in Krav Maga for the past six years. Originally becoming interested in the self-defense system because his son was taking karate, Greg decided to take a few lessons to become familiar with the moves and to be able to spar with his son. He was soon hooked, loving the mental and physical demands that Krav Maga asks of its students, and even met his fiancée in class!  After years of training and months of boot camp, Greg earned his black belt, which he feels is one of his greatest accomplishments.

Thank you for working so hard for Eastern Insurance, and your community, Greg!