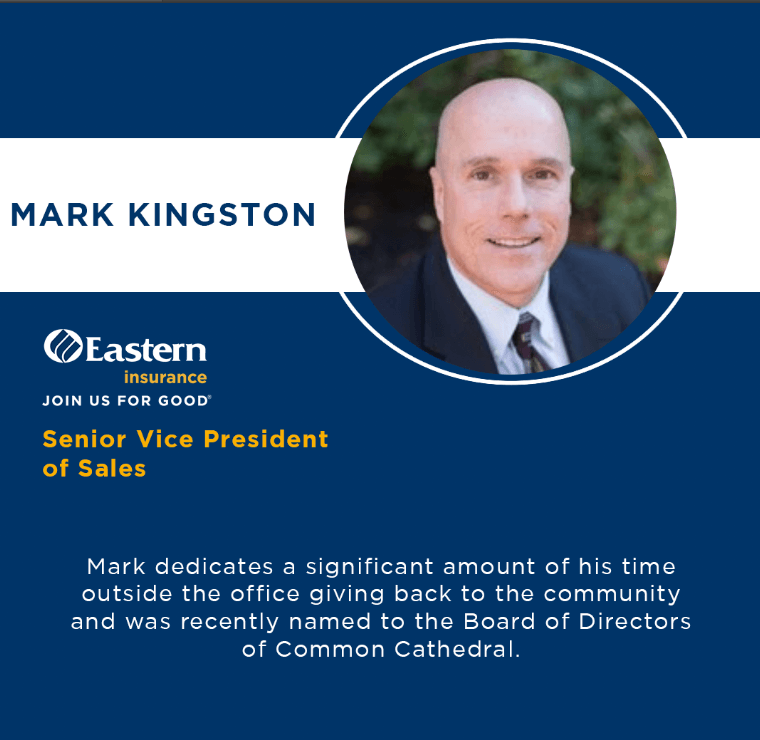 At Eastern Insurance, we pride ourselves on the quality of our employees. From their superior service they provide our customers, to their dedication they have for the  success of our company, we wouldn’t be where we are today without them. One of those employees who continuously goes above and beyond, not only in our office, but in his community, is our newest #EIGSpotlight — Mark Kingston, who has been with us for over 10 years!

Mark’s experience in the insurance industry extends far beyond just his time at Eastern Insurance, having spent many years with MFMT Insurance before being acquired by Eastern Insurance Group in 2008 — when he would join our team as Senior Vice President of Sales. His prior experience as an underwriter helped provide Mark with the foundation for his career, where he ultimately found himself enjoying the sales side of the business where he’s able to help people solve problems and find the appropriate coverage for those who may be considered difficult to insure. His lengthy career is likely  a result of his work ethic, and he shared that from a young age he learned, “if you just show up, you’re already ahead — having a good work ethic and just keeping your word will help anyone go far in their career,” which is the advice he gives to his own children today.

Mark attributes his longevity with us to “the commitment Eastern Insurance shares with parent company, Eastern Bank, to giving back to the community and encouraging employees to get involved,” also noting that the #JoinUsForGood campaign really resonates with him. Recently, Mark took advantage of the day of service offered by Eastern Insurance and organized a group of 10 volunteers to spend the day cleaning up the yards of those who are developmentally disabled.

Outside of the office, Mark is heavily involved in the community. One of his primary focuses is his support of Common Cathedral, an organization that just named Mark to the Board of Directors. An outdoor congregation on the Boston Common, they serve as an important community for people experiencing homelessness and for faith communities who want to be in a supportive relationship with un-housed individuals and their friends. As co-director of the Church of United Methodist in Norwell’s youth group, Mark initially got involved with the organization through their flagship mission, City Reach. Through this program, high school aged kids go into the city for 24 hours and meet with nearly 300 local members of the homeless community and share their stories. The kids are able to hear and see first hand the struggles that many of them have faced that led them to where they are now. As Mark shares stories of his involvement in this program, you can hear how passionate he is about it, sharing that “the program is a two-way street, the kids see that anything in life can happen no matter where they are now, and the homeless are able to feel heard and appreciated since many people ignore or avoid them everyday. Both groups end up gaining a greater appreciation for everything they have and many have built relationships over the years and look forward to connecting with old friends at our annual event — we even have students who come back on their college breaks and want to continue going back.”

One of the biggest initiatives Mark’s group has started is Dignity Cards. In an effort to help in any way they can and after hearing the needs of the homeless, they decided that gift cards to local places like Dunkin’ Donuts can go a long way. Collecting thousands of cards since they first began, Mark is incredibly inspired by the kids, saying that “you can see how much they want to give back and make a difference.”

Aside from his work in the insurance industry and the community, Mark enjoys spending time with his family, brews his own beer, gardening, and trying new things — for example, bee keeping!

Thank you for all your hard work for Eastern Insurance and in the community, Mark!